We went to the San Diego Low Speed Wind Tunnel with the objective of comparing our AeroJacket disc covers to uncovered wheels and disc wheels. The obvious advantage of racing with a disc cover is cost, however this data quantifies the performance advantage. 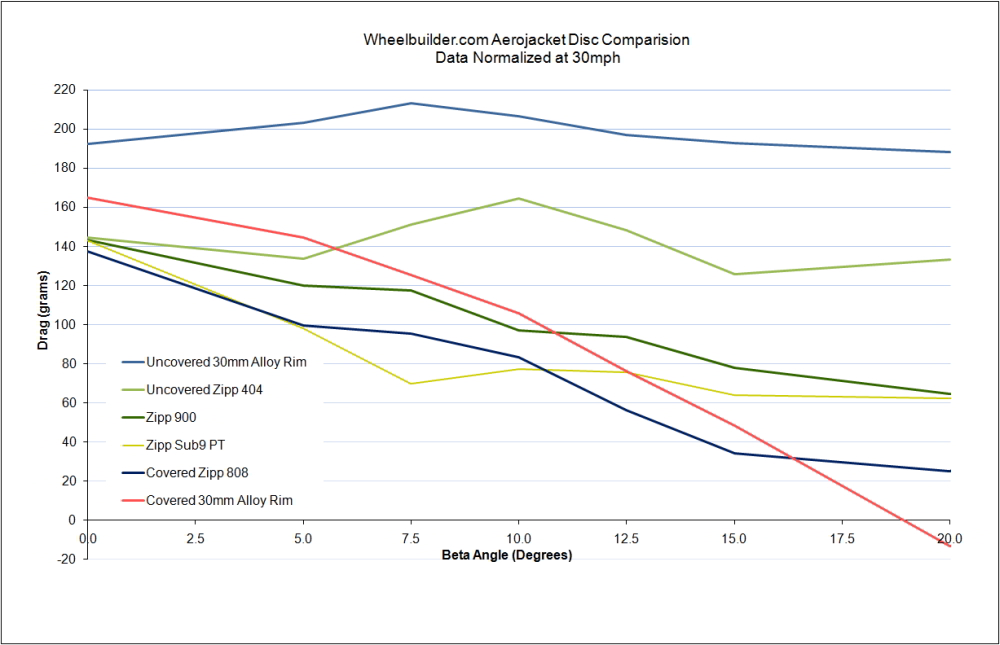 Drag on flat discs is nearly identical with wind traveling from rider's left or right sides. AeroJacket disc covers are asymmetric, with a flat drive-side and lens-shaped non-drive side, so drag differs depending on wind direction. The most favorable direction is with the wind traveling over the rider's right shoulder. For this reason we tested in both wind directions i.e., we ran the test forward and backwards and averaged the data. We ran the tests on the 30mm covered wheel (DT Swiss RR 585) twice on the advice of the wind tunnel staff who were, frankly, astonished by the results.

On a flat course, 80% of your power is used to overcome wind resistance ("drag"), so improving your wheel aerodynamics has the most significant impact on racing faster.

On flat or rolling courses, wheel weight is trivial relative to the dominant aerodynamic drag forces. Weight matters only when steep and prolonged grades are present.

Covers weigh 350-400g, which is small by comparison to rider and bike mass.  The weight is also evenly distributed around the wheel making differences in wheel inertia virtually imperceptible. Wheel inertial forces have less significance for steady state TT or Triathlon applications.

Create an account with us and you'll be able to:

Fill in your email below to request a new password. An email will be sent to the address below containing a link to verify your email address.